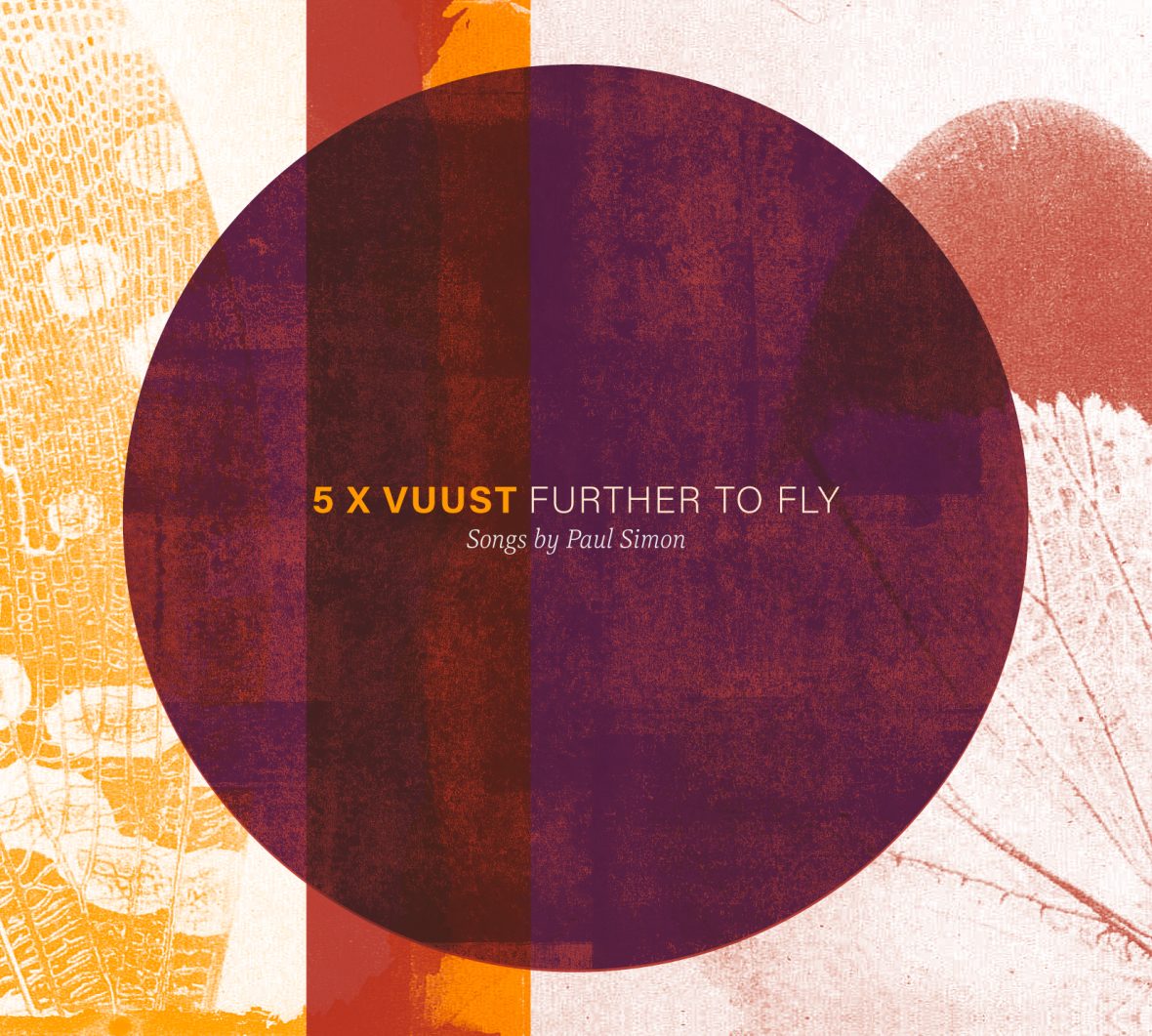 Danish jazz quintet and family band 5 x Vuust is releasing its debut album Further to Fly on 21 April 2022. The tunes are interpretations of songs by Paul Simon, the great American singer-songwriter behind “The Sound of Silence” and “Still Crazy After All These Years” – songs which are included in the album.

Further to Fly is the Vuust family’s musical tribute to their mutual idol Paul Simon. The band’s two generations don’t always agree on musical taste. But they can meet around Paul Simon’s music, which they have all listened to since childhood. This passion emerged during summer vacation stays at an aunt in the family, who was an incarnated Paul Simon fan.

Further to Fly was recorded in January 2022 in Copenhagen and Aarhus, Denmark.

5 x Vuust consists, as the name suggests, of five members of the Vuust family: Singer Clara Vuust and her brother, saxophonist Christian Vuust; their cousin, bassist Peter Vuust and his two sons, pianist and singer Frederik Vuust and drummer Mikkel Vuust. The latter four originate from the Aarhus music scene, while Clara is based in Copenhagen.

“By rethinking Paul Simon’s songs, which have had a landmark significance in folk and popular music, we hope to shed new light on his music: its harmonic and melodic richness, its lyrical universe and its rhythmic complexity. We want to show how relevant Paul Simon’s music still is, and probably always will be. Exactly this approach, reinterpreting music from popular music culture, is fundamental to the way jazz musicians work”, says pianist and singer Frederik Vuust.

The album will be celebrated at two release concerts:

Journalist and editor Kåre Gade says about Further to Fly:

“It is a strikingly obvious choice for 5 x Vuust to dedicate their debut album to Paul Simon’s music – to join forces in a tribute to this master of melody and poetry. The quintet’s approach is driven by a mutual love for Simon’s songs, and their interpretations are as playful as they are convincing. It sounds unmistakably like Paul Simon. And it sounds unmistakably like Vuust.”

Further to Fly will be released on 21 April 2022 on the Aero Music label (AERO 013), on CD (a 6-page digipak) and digitally. CD web sales: gatewaymusicshop.dk. CD distribution: Gateway Music. The album can be streamed and downloaded via all digital platforms.

Clara Vuust (b. 1974) Singer. Graduate from RMC. As a jazz soloist, she has released three critically acclaimed CD’s on Storyville Records and har performed on a large number of releases in both Denmark and Italy. Clara Vuust is especially known for her collaboration with Italian pianist and accordionist Francesco Calì, interpreting the Danish communal singing songbook and Italian jazz evergreens. Head of Frederiksberg music school in Copenhagen.

Frederik Vuust (b. 1995) Pianist and singer. Belongs to the new emerging generation of Danish jazz musicians, and has performed with prominent musicians such as Claus Waidtløw, Jesper Løvdal, Julius Gawlik and Nikolaj Hess. Frederik studies at the Royal Academy of Music, Aarhus, has a BA in Literary History from Aarhus University and has written and directed three short films.

Christian Vuust (b. 1964) Saxophonist. Associate Professor at the Royal Academy of Music, Aarhus. Has received the Gaffel prize as well as several nominations for the DMA Jazz Award. Has performed with Aaron Parks, Ben Street, Per Vers, poet Peter Laugesen and many others. Participates on more than 90 albums. Studied at Berklee College of Music, U.S.A. “Incredibly good … Modern, melancholic, Nordic jazz of high, high standard.” (***** Gaffa). “Sophisticated and lush” (DownBeat Magazine).

Peter Vuust (b. 1961) Double bass player. Professor at the Royal Academy of Music, Aarhus. Participates on more than 100 record releases, seven of these as band leader, with Peter Vuust Quartet featuring Lars Jansson, Ove Ingemarsson and Alex Riel. DMA nominated in 2014 for the release September Song, and received the Gaffel Award in 2007. Has played with many Danish and foreign jazz greats such as Tim Hagans, Dave Liebman and Mal Waldron. He is one of the world’s leading researchers in music and the brain, the author behind three books and more than 150 research articles in internationally recognized scientific journals, and has been featured in the scientific journal Nature.

Mikkel Vuust (b. 1999) Drummer. A shining musical talent, currently studying at the Manhattan School of Music in New York City, having Kendrick Scott as drum teacher. Mikkel has also been taught by Jeff “Tain” Watts. He has performed with renowned musicians such as Cæcilie Norby, Marc Mommaas and Mathias Heise.